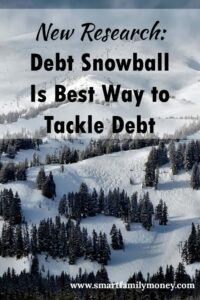 New research about debt pay-off strategies was published in 2016 in the Journal of Consumer Research. It has added evidence to support the idea that sometimes with money, psychology beats math.

If you have multiple debts, putting all of your extra money towards the smallest one will increase your motivation. By giving you small wins, you are likely to ultimately be more successful. T

This latest research is not the first to support the use of the debt snowball. Similar research at Northwestern University in 2012 reached similar conclusions.

Remi Trudel, an assistant professor of marketing at Boston University, discussed the recent research in an article on Harvard Business Review.

He and three colleagues began by investigating anonymous banking records of 6,000 families. They looked at the behaviors of those paying down debt to see which methods seemed to be most successful.

After noticing this trend, they sought to investigate more with three controlled experiments.

Paying Extra on One Debt Is Better Than Spreading It Around

The first experiment involved giving people multiple pretend debts. Participants were then randomly assigned a payoff strategy of either paying equal amounts on all the debts or paying a single debt at a time.

They could choose how long to play a word game to earn money to pay off the debt.

Participants assigned to the concentrated repayment strategy worked harder than those who dispersed their repayments, producing more words and repaying their debt 15% more quickly.

This probably comes as no surprise to anyone who has tried to pay off multiple debts. If you have an extra $100/month you can put towards 5 debts, it’s much more satisfying to put that $100 on one debt instead of $20 on each.

It’s even more satisfying if you are able to pay off one debt completely and close the account.

Paying On a Single Debt Increases Perception of Progress

The second experiment investigated the reasons why people worked harder on the one-debt-at-a-time strategy than with the multiple debt payments plan.

Did they perceive greater progress towards their goal when they paid larger amounts on a single debt?

In that study, participants who had been assigned to a more concentrated strategy – paying off one or a just few accounts at a time – did indeed perceive greater progress toward their goal of getting out of debt, which in turn enhanced their motivation to succeed.

This, of course, doesn’t match the mathematics of the situation. If you pay $20 on 5 debts or $100 on 1 debt, you’ve made the exact same progress towards your ultimate goal of paying off all the debt.

This is a case where math doesn’t matter as much as human psychology. As much as we’d like to think so, humans are not completely logical beings.

The Percentage of the Debt Paid Off Is What Matters Most

The third experiment investigated further why one debt at a time is more satisfying.

We tested a variety of hypotheses and ultimately determined that it is not the size of the repayment or how little is left on a card after a payment that has the biggest impact on people’s perception of progress; rather it’s what portion of the balance they succeed in paying off.

It’s the same amount of debt paid off either way but is perceived differently. Perception affects motivation, which can make all the difference in the ultimate results.

The author goes on to explain that the research supports the idea that most people should use the snowball method, assuming interest rates are fairly close.

He also suggests that debt consolidation could have a large negative effect on motivation.

How about you? Have you used the Debt Snowball or some other method for paying debt?