I’ve written a lot about toilet paper on this blog, comparing brand names and store brands. If you’d like to check out a summary of my findings, please read my ultimate guide to cheap toilet paper.

The toilet paper tests I performed were:

I tried to word all of the tests so that all tests have the same result name:

Of course, it would be unlikely to get a high rating in all areas, so you have to decide which factors are most important to you.

To test the toilet paper strength, we taped one sheet of paper onto the bottom of our kitchen cabinets. Then we attached a bucket to the other end. We slowly added weight to the bucket (mostly marbles and batteries) until the paper ripped. Finally, we measured how much weight the paper held before it ripped. We ran the test three times and took an average for each brand. 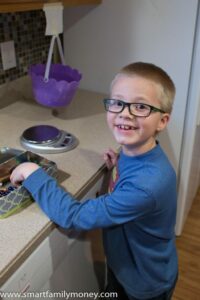 Strength ratings were divided as follows:

To determine softness, I had several people touch the toilet papers and rate them for softness. This was surprisingly difficult to do, as everyone defines “soft” a little differently. Does softness mean fluffiness? Slipperiness? Pliability? This was a hard one to rate. Still, when I averaged our rankings, the overall ratings made sense and I grouped them into low, medium, and high softness. 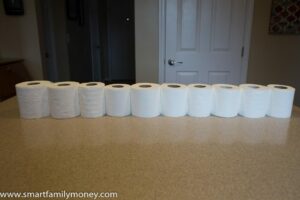 All of my test subjects!

In order to be as objective as possible, I attempted to rate the toilet papers for thickness in terms of how opaque they are. If they don’t let light through, then they’re thick, right? I also confirmed my findings by touching them.

To test how transparent or opaque they are, I taped them all to the window to see how much light was let through. I grouped them together into low, medium, and high thickness. 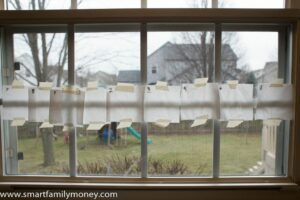 TP on my window on a gloomy January day

I actually ran two different absorbency tests because I was worried my first wasn’t accurate enough. Surprisingly, the two tests gave similar results to each other. Most brands were pretty similar, so the majority of them got a rating of medium. Two stood out as especially low and one stood out as high.

The first test was checking to see how far blue water would spread out when dropped onto a sheet of paper. I then measured how large the circle was after it had spread. 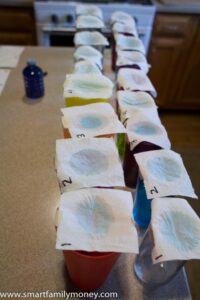 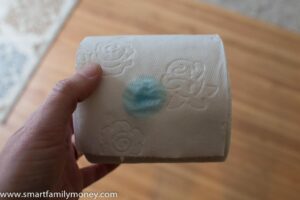 First, I dropped blue water onto the roll of TP 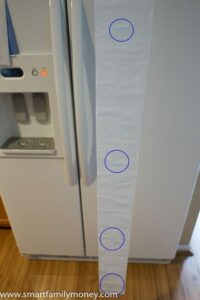 Then I unrolled the TP and counted how many dots of blue water there were.

For later rounds of toilet paper testing, I decided to only use the soak-through test since it was easier and seemed consistent with the other test. 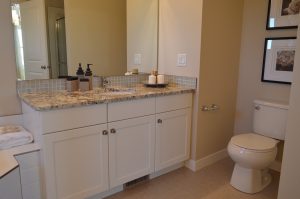 The REAL testing happened behind closed doors (but this isn’t my real bathroom!)

Many people would prefer their toilet paper to be lint-free. This is both for the cleanliness of their private parts, as well as the cleanliness of their bathroom. I had difficulty designing a test for this factor until I realized that facial hair stubble would work perfectly. A certain male test subject (who would prefer to remain anonymous) allowed me to rub toilet paper on his unshaven face to see which ones generated the most lint. Like with absorbency, most of the brands were similar on this test so I gave the majority a medium rating. Only one stood out as truly lint-free so I gave it a high rating. Two brands that produced a large amount of lint got a low lint-free rating. 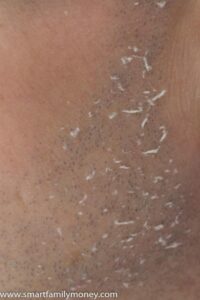 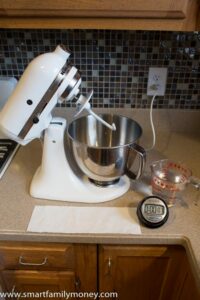 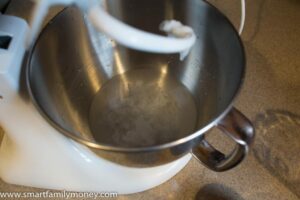 This is what the toilet paper looked like after it dissolved.

The ratings for dissolving were divided as follows:

To determine a toilet paper’s value rating, I looked at prices. Part of the reason I wrote the posts about the cheapest Cottonelle toilet paper and cheapest Charmin toilet paper first was that I needed prices to compare. I discovered while writing those posts that toilet paper pricing is ridiculously complicated! Comparing prices between brands gets even more complicated because there are different sheet sizes. The fairest way to compare prices would be to compare price per square foot instead of price per sheet. After analyzing the numbers, though, I found that they ranked the same whether I looked at square footage or sheets, so I am going to concentrate on sheets for simplicity. I ranked them by price per 1,000 sheets like this:

Note: These price ranges are originally from January 2017. In my second round of testing in March 2018, I raised the ranges slightly since prices had risen. The High, Medium, Low ratings are still as relevant as ever, though.

I based the price comparison on the lowest non-sale prices I could find for that brand. I also did not consider any coupons or subscription discounts. Those could certainly lower prices, but I wanted to find the best value without any hassle. 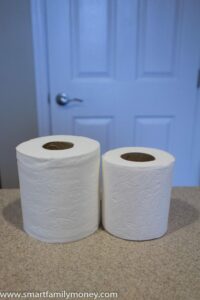 “On a Roll” with Toilet Paper

Be sure to check out the rest of my toilet paper series, especially my ultimate guide to cheap toilet paper.